Rust never sleeps and it can fly across the Tasman

Waikato people are being asked to keep an eye out for a rust-like fungus which could kill off iconic native trees in New Zealand.

Fears of Myrtle rust being blown over to New Zealand from Australia have been heightened by news that Australian butterflies have been sighted recently in the Bay of Plenty. It’s thought they may have been blown over by Cyclone Ita.

The Ministry for Primary Industries has warned this could indicate the prospect of more such sightings of potentially airborne Australian organisms, including fungal spores such as Myrtle rust. This fungus can damage pohutukawa, manuka and rata, as well as some commercially grown exotic species.

Myrtle rust has been in Australia since 2010 and is now established in New South Wales, Queensland and Victoria. New Zealand has strict measures controlling material that may carry myrtle rust into the country.

The identifying sign of the disease is powdery bright yellow or orange-yellow bumps on actively growing plants. Leaves may become buckled or twisted and die off. Severe infections can kill the host plant.

“This disease is difficult to eradicate once established so the earlier we hear about it the better,” said Waikato Regional Council biosecurity group manager John Simmons.

“We ask the public to keep an eye out for any signs of this disease and to report it to the Ministry for Primary Industries as soon as possible.”

Our picture (below and attached) shows Myrtle rust on willow myrtle. 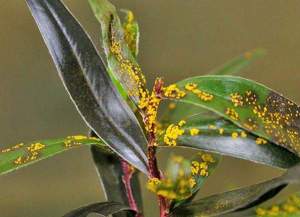