Over the past six months, Council’s contractor has been working steadily on strengthening the structure of the canopy and three railway buildings, along with the exterior restoration at the Te Kuiti Railway Station.

This phase of the Railway building revitalisation project is expected to be finished by the end of March.

Building three (a brick building), required extensive work including the construction of an internal timber frame connected to the external brickwork to meet the structural strengthening requirements.

A new doorway has also been built to improve access and usability of this building. 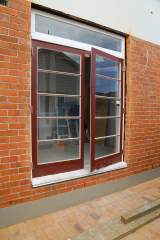 It was considered to be more efficient to complete all internal works to building three at the same time as the structural work.

Project Manager John de Luca says “Building three is scheduled for completion later this month and it will then be available as community space.”

In the central building (two) the focus has been on completing the external refurbishment, strengthening the structure and installing water sprinklers; which have also been installed throughout the other buildings and canopy.

The fireplace inside building two has been removed, as it was structurally unsound. 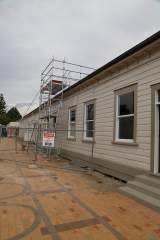 An internal wall will be removed to make way for a more open plan layout of the building.

Contractors are currently re-building a revised internal structure of the chimney with the external appearance matching and utilising the historic brickwork.

WDC’s intention is to utilise Building 2 as a café / bar / restaurant, providing income to offset the ongoing building complex maintenance.

A letter of intent has been signed with an operator and the timeline for completion for this internal project is October 2015. Contractual documentation is currently being prepared.

The new layout of building 2, along with the layout that will connect Building 1 to the i-Site have both been approved by the Historic Places Trust. 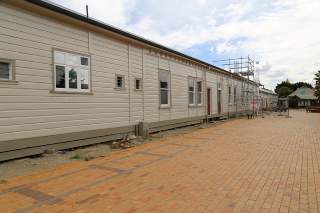 The contract for the development work to connect Building 1 to i-Site into community spaces is also advancing and is due to be completed in April.

The refurbishment of the canopy (railway side of building 1 and 2) will also be completed in March.

Works have included re-roofing as well as three additional steel portals for structural strengthening, fire sprinklers, and the installation of new skylights.